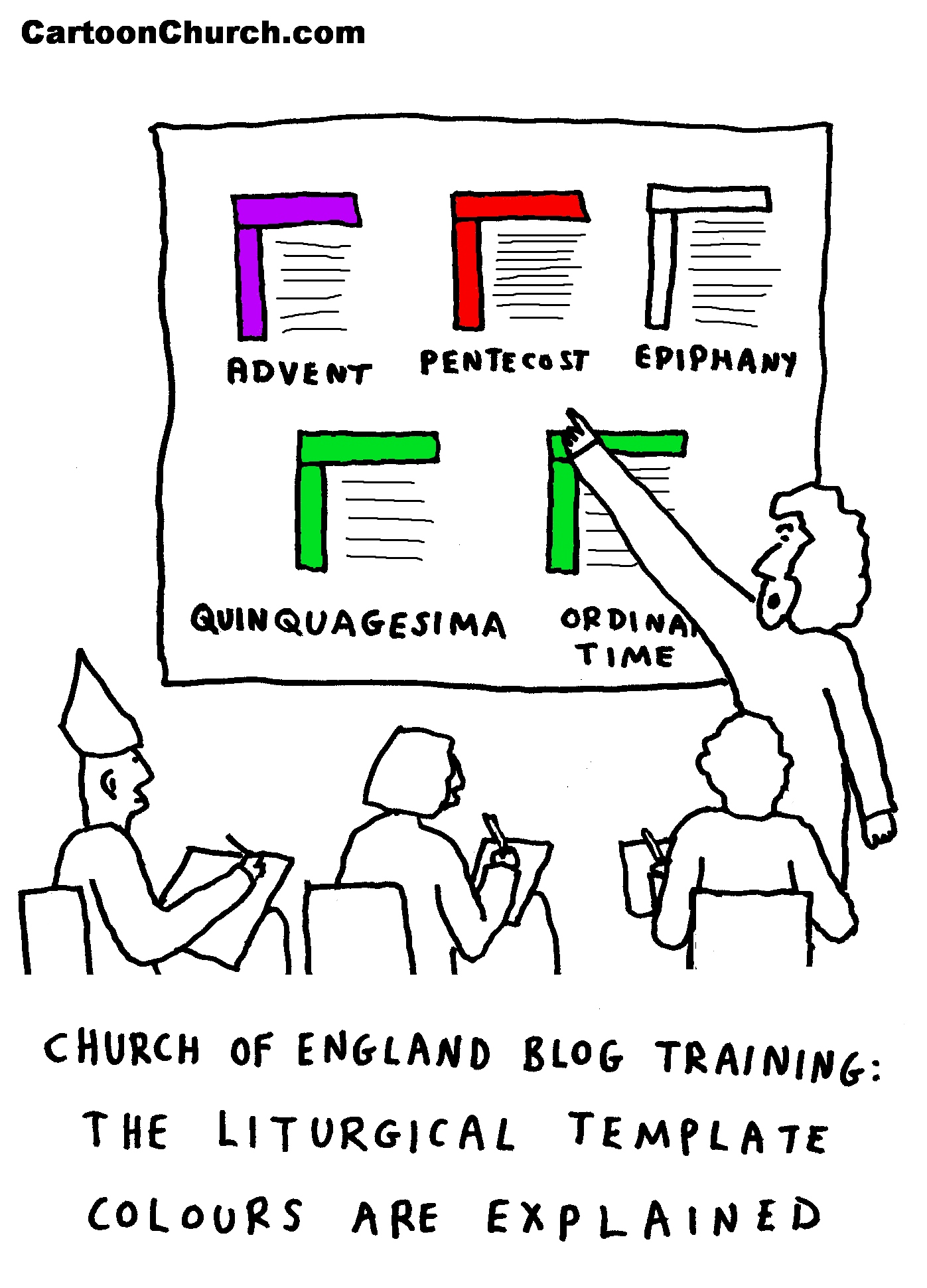 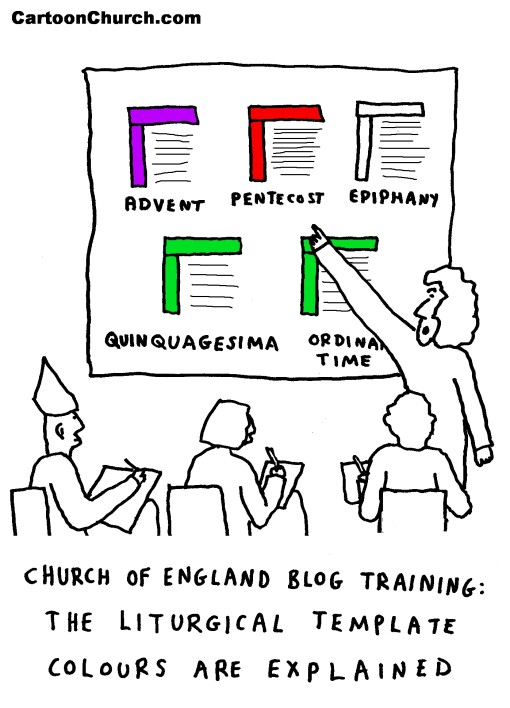 All being well you should now be seeing this post on version 4 of the Cartoon Blog, which went live today.

The site has been moved to a fast server along with my CartoonChurch, Cycling Cartoons and Highly-Secret-Project-X websites, and I thought that while I was doing that I’d also make a few changes. The orange is back, and I’ve made the blog aspect of the site more central again. I’m also hoping that it shows off my work a little better than the previous website did.

Everything may not entirely work – if you come across anything non-functioning then please do let me know.

I thought it would be fun, while I’m on blog-changeover day, to take a look at Cartoon Blog versions 1-3. Please forgive the slightly introspective nature of the remainder of this post. (You may need to click ‘Read more’, or suchlike.) 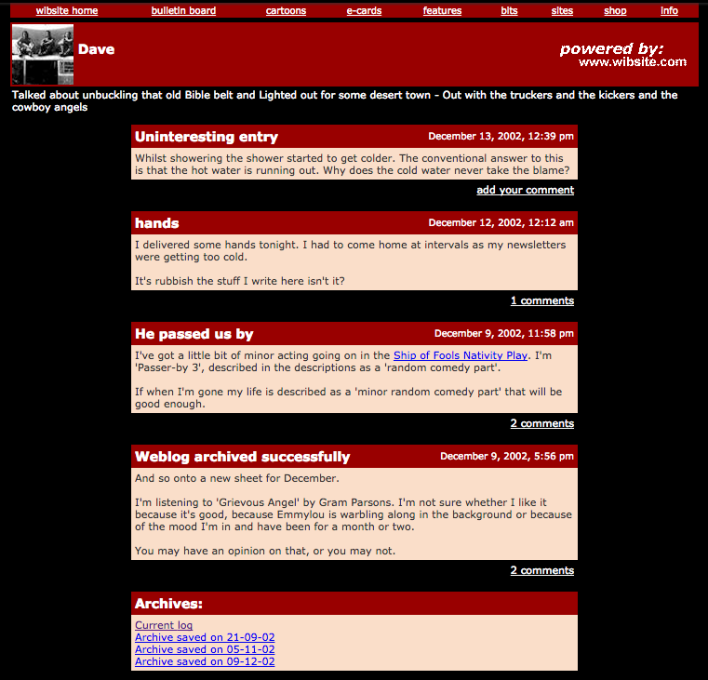 This was on the Wibsite, which included the Wiblog system ably built by my brilliant friend Chris Taylor. As you can see the blog was new at this point, and I was mainly using it to spout nonsense. And why not. The post ‘Uninteresting entry’, above, is clearly limbering up for the Dullest Blog in the World, fairly popular in 2003. There were cartoons on the site, but I clearly hadn’t worked out how to blog them. 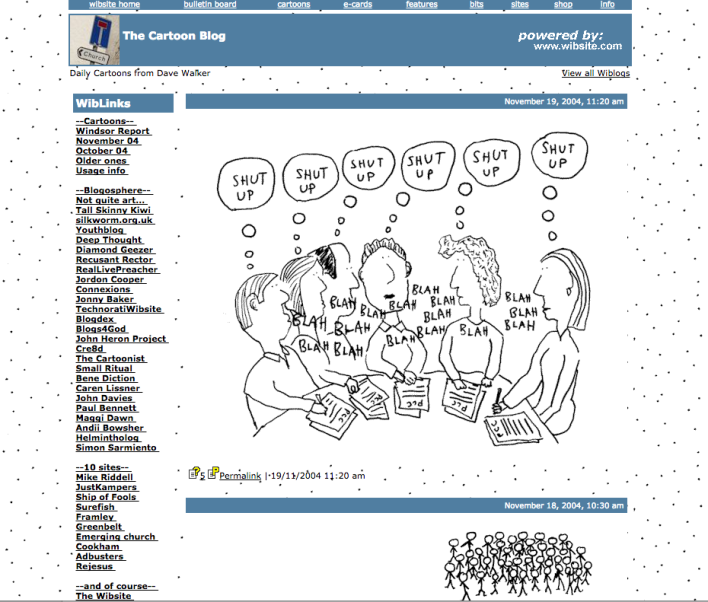 By this time I was posting cartoons and was using the name ‘The Cartoon Blog’, having called it ‘Tangled Wib’ for a while. I was about to leave my job as a Youth worker in Cookham, Berkshire. 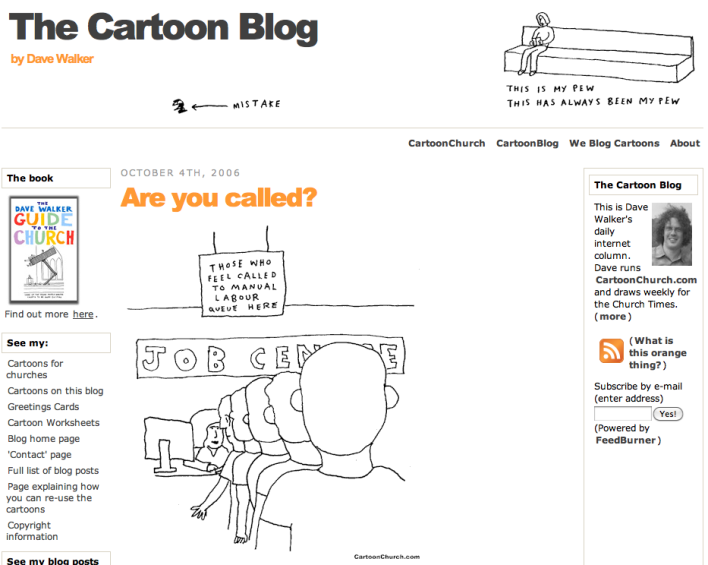 This screenshot is from 2006, but the site looked like this from April 2005 right up until 2013. The site was on WordPress, and I had lots of hair. It’s strange to think that Twitter had only been launched a month or two before this, though I wasn’t to discover it until July ’07. I probably wrote 1500 posts (estimate) on this version of the site, despite 10 years of continual technological problems/ineptitude. 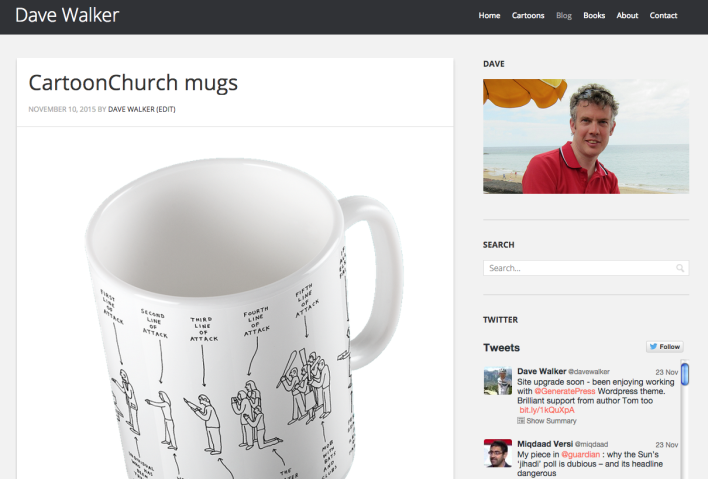 The screenshot is the blog as it was yesterday, but I launched the site in this form in 2013 to make it independent from my CartoonChurch site. In hindsight the design was a bit grey and the blog aspect got sidelined slightly.

This is the blog as you see it now. I decided to go back to orange and black, and put a lot more blog posts on the front page. I could bore you with the technical aspects, but let’s just say it’s… better. I’ve also come to the conclusion that I do really prefer blogging to Twitter/Facebook, so hopefully there will be more to see here than there has been. But that’s always a dangerous thing to say.

Thanks to everyone who has been reading and commenting over the last 13 years – here’s to a year or two more.

You can get the Cartoon Blog by email by clicking here