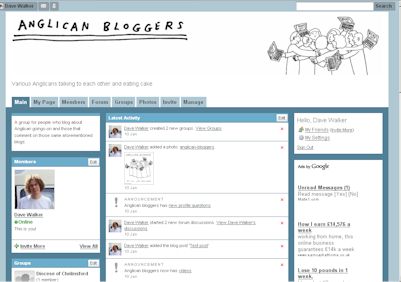 I’ve been playing around with the ‘site to bring Anglican bloggers together in perfect harmony’ idea.

I have to say I liked Joe’s idea in the comments the other day:

It would be quite interesting to have just to have a single page at Anglicanblogs.com which was a tagcloud of current tags on the anglican member blogs.

Unfortunately having spent a bit of time playing around I can’t quite work out how one would do such a thing. One would need a feed containing lots of different blogs for a start. I’ve tried various methods, such as combining feeds on Yahoo ‘Pipes’, but the number of feeds you can combine is limited to 5 and it just doesn’t seem to work very well.

On the Anglicanblogs.com domain I clicked a few buttons in the hosting panel and all of a sudden I have a ‘Joomla’ website. All very good but
(a) I don’t have time to build a website using Joomla, and
(b) Using a content management system like Joomla involves an admin putting the content together, whereas I think the way to go is a site where everyone puts the content together.

So, I followed Richard’s suggestion and made a site on ‘Ning’.

The site is at anglican.ning.com, though at the moment it is invitation only because where you can have a play around with it. I’m not sure whether Ning is the right system to use though, so I’d like a few people to test it for a day or two. Please send me a quick e-mail at dave at cartoonchurch if you’d like to have an invite to test it (or a note in the comments is fine thinking about it). You could also take a look at the Anglimergent site (site for cool Anglicans) to see the kind of things Ning does.

As I see it there are pluses and minuses of using Ning. To start with the negative aspects:

I’ve no idea whether this is a good way to go about things. One fairly important thing is that this isn’t a site about me. If we decide to go with it it would be good to have some other people doing the adminning for instance.

It could also be that there is some technical genius out there who could come up with a better way of dong things. If so please do say so fairly soon.

Let me know what you think.