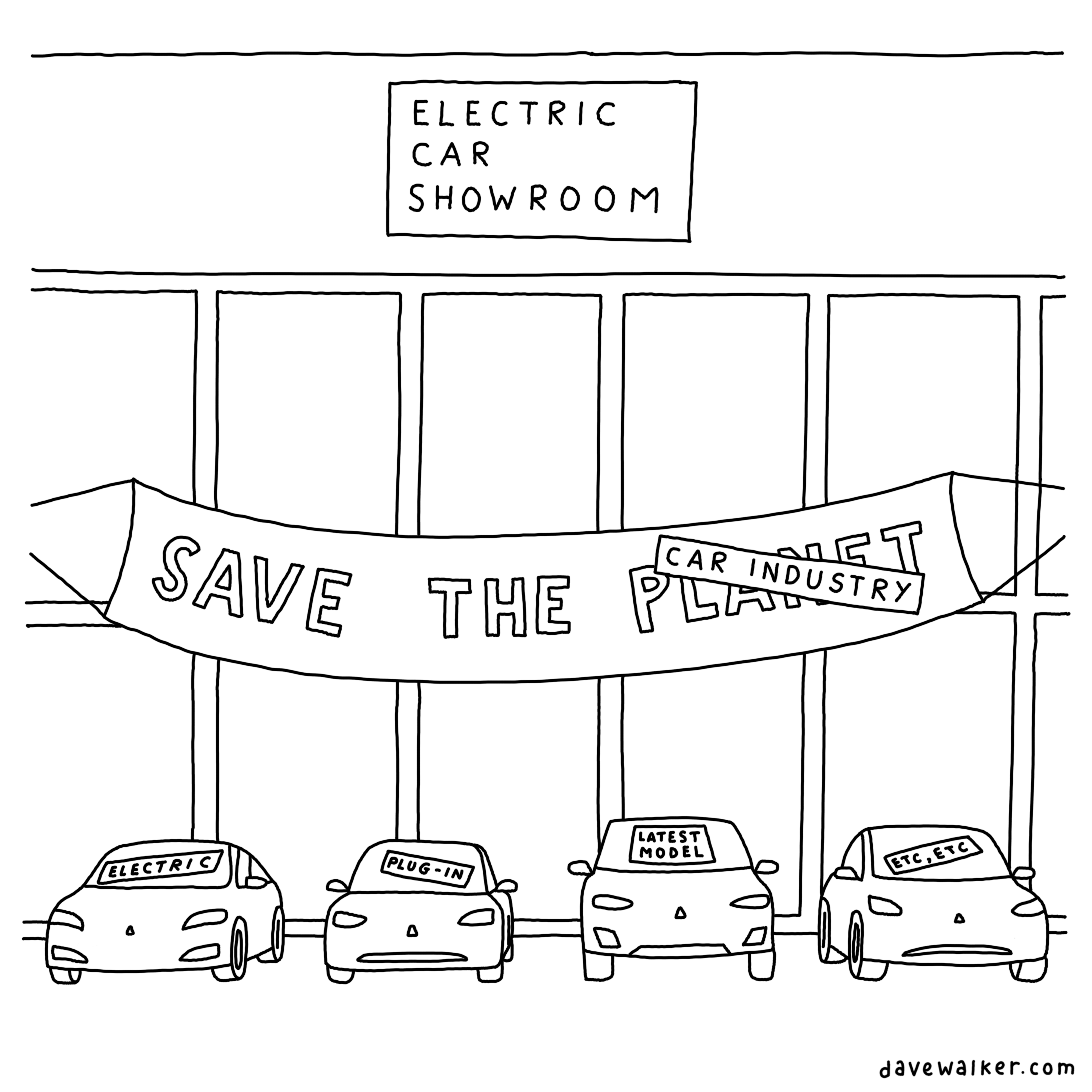 You may have seen one or two drawings I’ve done about electric vehicles (EVs), and I wanted to answer the ‘Are you against electric cars?’ question.

In summary: not at all. However, there are a number of reasons, in my view, to be less than wholeheartedly enthusiastic about electric cars.

They are only as green as the electricity powering them. A lot of our electricity isn’t yet from renewable sources, sadly. Having a green badge on your numberplate doesn’t mean that the vehicle is using green energy.

Producing an electric car is a carbon-intensive activity. So, whilst the carbon impact per mile may be lower than a fossil-fuel-powered car, there’s a huge environmental cost to making the car in the first place. This combined with the electricity-mix point, means that, to take one example, a Volvo C40, will need to be driven for 9 years before it becomes a greener option than a petrol car. Scientists tell us we don’t have that sort of time left before we must start turning things around and significantly reduce our carbon emissions.

They are often seen as the solution for greener transport. At the COP26 climate summit in Glasgow, electric cars were more or less the only transport ‘climate solution’ being talked about and on display (inspiring my graphic, below). The reality is that we need to significantly reduce our dependence on private cars in favour of cleaner ways to travel, such as walking, cycling, and public transport. Electric cars don’t solve the problem of carbon emissions from transport.

If you have an electric car, the danger is you’ll drive it more. You can see how there would be a big incentive to do so, if the per-mile cost is cheap. Unfortunately this cumulative effect of everyone driving more, albeit in greener vehicles, is that it makes life worse for everyone else. Congestion is the inevitable result, which makes public transport alternatives such as buses less reliable, and makes it less appealing to walk and cycle. There’s a risk of us becoming more reliant on cars, not less. Road pricing (tolls) will be inevitable, I think, but I suspect there will be huge public resistance, making the idea politically unpopular.

Electric cars are great news for the car industry. Having to switch all the vehicles in the world over to a new technology is brilliant news for motor manufacturers. I think that’s something we need to remember when they are being sold to us. But in general the car industry won’t tell us the whole truth, which is that we need to reduce our reliance on cars, and switch to alternatives where we can.

All cars pollute, no matter how they are powered. Besides the manufacturing costs, already mentioned, all vehicles produce tyre dust, that runs off the road into water courses and the surrounding environment. Electric cars, being heavier, will produce more than petrol or diesel cars.

Some of the resources made to produce batteries are scarce. There are issues with cobalt, lithium and nickel, among others – either that the quantity available to us is limited, or that there are ethical issues relating to the extraction process, and the conditions faced by those extracting the minerals, often in poorer countries. As we transition into a low carbon world, are batteries for heavy luxury vehicles (which many EVs are) the priority for these scarce resources? I’d suggest not.

In summary: I see electric cars as one part of the solution, but not the main solution, for the reasons I’ve given. Reducing our use of private cars, and increasing use of active means of travel and public transport are far more important. Hence my drawings.

People have said to me, commenting on the drawings I’ve done about electric cars, “Don’t let ‘perfect’ be the enemy of ‘good’. Electric cars are better than nothing”. Yes, they are better than doing nothing. But that doesn’t mean staying silent about what is needed alongside their continued introduction. It’s important that the message that electric cars do not solve the problem on their own is also made clear.

Would I buy one myself? I try to drive as little as possible, and catch the train or ride my bike when I can. But, especially living in South Essex, an area where the car is king, there are some journeys for which driving is the only option. So yes, I would probably buy one, if I could afford to, and if the infrastructure continues to develop. And in time it’s looking likely that legislation will require that anyone who drives will drive an EV. But let’s not forget the need to invest heavily in alternatives too.