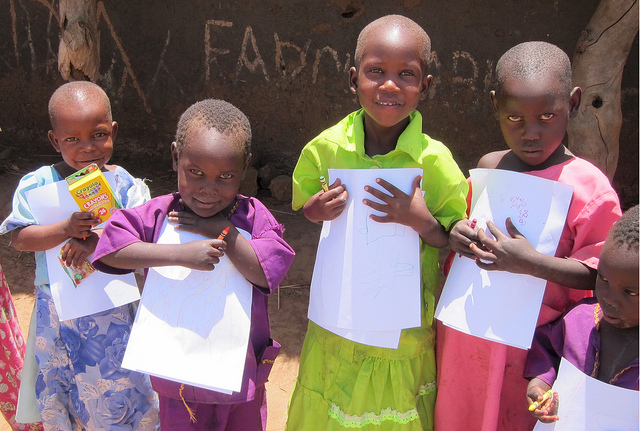 Today has been quite remarkable. We had our first visit to Ogongora, the village in Uganda that we have come to see. There is so much to say about it, and I’d hoped to do some drawings, but technical woes and feeling generally overwhelmed means that not-particularly-eloquent writing and photos will have to do again.

First of all, a bit about the village and what is happening there. The people there returned from a refugee camp about five years ago, having been displaced due to fighting. They had to start more or less from scratch, and Tearfund have been working through a local partner, PAG (Pentecostal Assemblies of God), to introduce a programme that helps local communities to improve their lives. This happens by showing people that they can make changes and improve things themselves, rather than relying on handouts. Ogongora is an example of this process, but it has been happening in many other villages too. The programme is called PEP – I can’t remember what this stands for. So, about our visit. Picture 1, above: Children show us their drawings. These were some of the children who greeted us as we arrived, each wanting to shake us by the hand. They attend the nursery at the church. We gave them some paper to draw on – this was something very unusual for them. While we were there they had their me porridge (below), which for many could be their only meal of the day. One thing that struck me: it costs about £1.20 for a term for children to attend, but not all do as some families can’t afford it. Above: The church building. This is the grandest building in the area. Just being in such an unfamiliar setting would have been enough to think about on its own, but we went on to speak to various people who told stories of how things have changed for them (see below). Above: Drying-up rack. This is a simple example of the kind of change that has happened. Before the PEP programme was introduced dishes would often dry on the ground, which meant that all sorts of things could get on them, meaning that disease spread more easily. We heard that since this change was made people from other villages have seen it and used the idea. We went to talk, via an interpreter, to a lady called Elizabeth (above). She is a widow and has leprosy. She has gone from begging to being one of the most prosperous people in the village as a result of the PEP programme. A lot of it (and I’m still learning about this, so please excuse vagueness/inaccuracy) seems to be about making a small amount go a long way as a result of a growth in confidence, persistence, making wise choices, and faith. This picture shows her granary (on Flickr I called it a larder, but you get the idea) where she stores produce that she has grown to that it keeps and can be sold. This means she can afford to grow more, and in the longer term she is hoping to move. The contents of the larder are shown below (corn, millet, and out of sight, soy gum (Bex thinks so anyway). You can read more about Elizabeth here on the Tearfund website. This is a potted summary. We talked to other people – including Richard, who Liz has talked about here. Bex also has a great video of him playing a home-made instrument here (put computer on its side).

We’re going back to the village tomorrow. Thanks for your comments, and sorry not to have had time for reply to these and tweets. I promise that I will possibly do some drawing tomorrow.