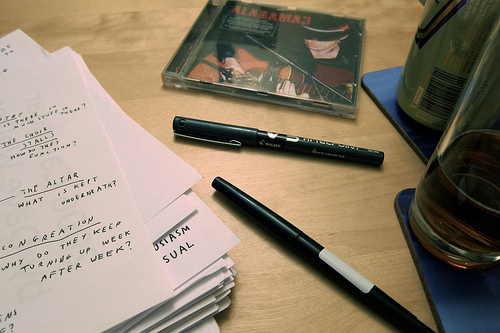 A little bit of a blog update, an August 2011 newsletter if you will, to let people know that I am still technically here.

Five years
On 3 August 2006 I posted on this blog to say that a book of cartoons ideal for reading whilst reclining on one’s side was about to be published… and that I was taking a break from blogging to get married. Five years ago – goodness. It was the best thing I ever did (getting married, not the book of sideways diagrams).

Twitter, etc
I’ve been off the social media and not sending many telegrams for a while as I’ve been concentrating my mind elsewhere. The world has kept on turning perfectly happily without me being involved in such activities. I don’t foresee any immediate reversal of this general state of things, but who knows.

HQ
The final dregs of my CartoonChurch HQ detritus were cleared up yesterday, and the keys and fobs given back. It was a bit sad but the right choice to make. I took one or two very poor photographs of myself standing in the vicinity of a vacuum cleaner in the office just because I will never have that opportunity again. The house, the garage and Sue Ryder’s Laindon emporium are all more cluttered than they were before.

Cards
A lot of time has been spent packing up the majority of my greetings cards. I have sold most of the stock to Hymns Ancient and Modern. They will be selling them at Greenbelt, and also, one imagines, via the internet / Church House Bookshop / elsewhere. It has been discovered that my wife is a lot better at putting cards and envelopes into wrappers than I am. The most efficient way to get the job done is for her to do the actual work and for me to do peripheral tasks that do not involve doing the actual work.

Greenbelt
I’ve done my annual map for the Church Times Guide to Greenbelt. If you’re a Greenbelt Angel (regular supporter) you’ll get one before the festival. Otherwise, if you are a Greenbelt-goer, look out for people a bit like me giving them out. There will, all being well, be a cartoon exhibition as usual in the Church Times tent, which this year is also G-books (the bookshop). I’m not doing anything at Last Orders or appearing in any on-stage way this year, but I will be appearing in tea queues and sitting on steps. A t-shirt that I may or may not have drawn may or may not be available.

New regime
Doing more thinking over coffee at the Salvation Army Headquarters and doing more drawing in the offices of the Church Times newspaper has been working quite well. This week I sent off four Church Times diagrams. This is unheard-of and the editor was incredibly surprised, thinking that my promise was figurative. Thanks must go, as ever, to those who have helped me, via this blog, in conversation, and by sending things.

Negotiations
One of my diagrams may appear on a [shouldn’t say]. My people (me) and their people (them) are still in negotiations so I can’t mention it.

Gift
I was very pleased to see that Liz enjoyed the picture that some of her friends gave her.

Filler
I forgot to iron the left half of my shirt today. No one noticed. Half-ironing of items could be the answer to all sorts of things including some problems that haven’t yet been thought of.

Fenestration
The window cleaner did the back windows.