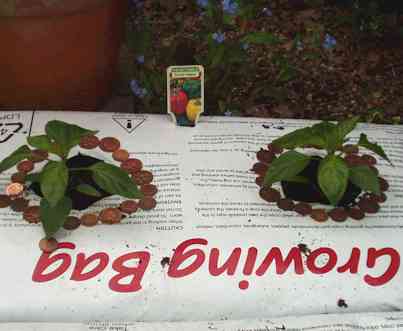 This is a second consecutive post about gardening as it has been the Bank Holiday and I am sure that is the subject that everyone is interested in on a Bank Holiday. I mean, look at this chart!

These are the copper tuppences and wuppences (singular of tuppence) placed around our pepper plants. This was done before I read the comments on the previous post. It is worth a try even though some of the commenters raised their metaphorical eyebrows at the suggestion.

Note: We did not grow these pepper plants from seed but bought them in pre-prepared plant form. I thought you should know. The label which has been stuck in the growbag shows the different colours of peppers we will be harvesting in a week or two.

Any of the neighbours looking out of the window may not realise the technical basis behind the copper coin method and may have thought it is some sort of a new-age hippy ritual. But it does have a clear technical basis involving electricity because I read it on the internet. The next idea I will try will be a great big sign saying ‘no slugs’. This will make it clearer to the neighbours, and hopefully the slugs.

We have also planted various floral seeds willy nilly around the garden. Some of them fell on the patio because I am not very good at the scattering. Some of them fell in the area where the cat goes to the toilet. These may not do well as she does random digging. Others fell in the pots with the dubious-looking soil which have held other unsucessful plants (The soil has whitey-blue bits which might be ant powder or perhaps some other sort of soil lurgi, and also lots of dead roots). Other seeds fell into the other pots, and hopefully some of them will do OK and end up looking nice and floral.

Make of this what you will.