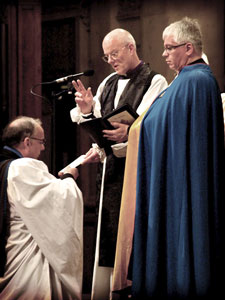 The new Church of England ‘Olympic Tsar’ was licenced yesterday at St Paul’s Cathedral. He is shown here with a three handed bishop: one hand adjusting the microphone, one hand engaged in a service sheet tug of war and one hand holding the great big book.

I wanted some information on tsars and what they do, so I looked it up. ‘A male monarch or emperor, especially one of the emperors who ruled Russia until the revolution of 1917’ apparently, but it can also be ‘a person having great power; an autocrat’ or ‘an appointed official having special powers to regulate or supervise an activity’.

Looking at Google News it appears that there are drug tsars, flood tsars, food tsars, design tsars, trash tsars, tourism tsars, canal tsars and dementia tsars. These are either in existence or being called for by someone or other somewhere or other.

If any tsars are reading please write in and tell us what you are a tsar of and how being a tsar is different to being a non-tsar.

The C of E Olympic tsar, by the way, will do the following:

Duncan’s role is to work on behalf of the Church of England with the ‘More than Gold’ structure and with LOCOG and the LDA. The aim is to help mobilise the churches of London and the nation to serve and witness to the Olympic movement in producing the best possible games and ensuring a positive legacy for East London.

If anyone would like to explain what this means then feel free to write in as well.

You might remember, by the way, that I posted about this post in December 2006, along with this cartoon which I plan to repost each and every time the Olympics is mentioned anywhere by anyone: