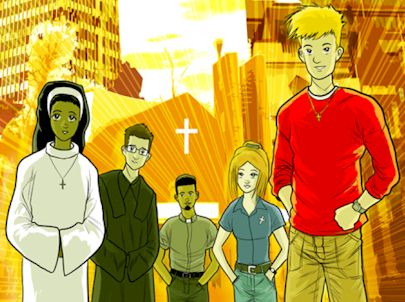 The Catholic Church of England and Wales is using a cartoon campaign to encourage young people from 10 years old upwards to think about becoming a priest or a member of a religious order. The website, ‘calledtoday‘ was launched today and there are posters going to schools and churches and anyone else with wall space and blu-tack.

I can see why they are only targetting it at 10 year olds – 8 or 9 year olds just wouldn’t be suited to being in a religious order at all.

The cartoons are in a ‘manga’ style apparently. I don’t really ‘get’ manga, but then I don’t get lots of things because I am old. I have to say I like the stories of real people on the website, but the poster doesn’t really make me want to look at the website in the first place as it doesn’t give me any idea what it is about.

Anyhow, the blurb about all this is on the Catholic Church website here, and the Telegraph has reported about it here.

As an aside, the Catholic Church website in England and Wales must be the worst religious website in the UK. I can’t look at most of it because the menus quite simply don’t work. It might just be Firefox they don’t work in, but I’m not about to fire up Internet Explorer to find out in case I break something.

I’m sorry, but I’m not even going to consider becoming a Priest in a denomination whose website doesn’t work. Also I am married.