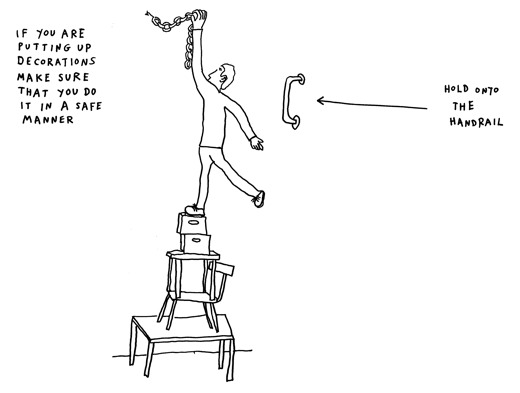 Cartoon by Dave Walker, all rights reserved, all infringements frowned upon, other legal speak, etc etc.

In the past I have done a Christmas message. I thought I’d do another this year, but don’t read it unless you really don’t have a lot to be doing. Here is a summary of my cartooning year. I have made some of the dates up as I can’t remember them.

In January I did my tax return. I advise leaving it until the last minute.

In February an iPhone app was made. I think some people still use it, and it was, I am told, the thing that gave the Methodists the idea to do theirs.

March was spent booking to go to the Spring Harvest camp for enthusiastic Christians, which we went to in April. We came away terribly enthusiastic if I remember correctly.

In April I also did my 2011 calendar Church HQ, the deadline being March. I was pleased with this calendar, and go on about this to anyone who will listen. My favourite cartoonist William Heath Robinson was the inspiration, so if you like the style of this particular calendar you might like his style as he thought of it first. One of my 2011 ambitions is to go to Pinner, where there is a house being done up in his memory. I have never been to Pinner. I have fairly low ambitions.

In May I put together my book ‘the Exciting World of Churchgoing‘, the deadline being April. This has been popular, being in the Church Times (note italics – I italicise for a living now) top 10 for four months in a row. This is largely due to bribery and family members buying in bulk.

Sometime around then I moved into CartoonChurch HQ, my office in the heart of industrial Basildon. Then I moved into a different office that was smaller but with the same number of walls. I don’t know whether this has been a success or not. I’m not about to move out of it though owing to the effort I went to to put together the various items of DIY furniture. Please come and see me there. I have coffee and often a choice of biscuits.

Also at some point I started work doing the Church Times website. I enjoy going into London on Wednesdays and Thursdays and being a commuter and seeing human beings. I like doing the job, and I have made good friends at the Hymns Ancient / Modern.

In the summer I stood up and showed some diagrams in the Greenbelt comedy ‘Last Orders’ show. I don’t know whether I’ll do more of that kind of thing or not. It was fun, and people seemed to think it was quite good, but I used up every idea I’ve ever had.

I can’t really account for the autumn months. I think I went to several Christianity and Advanced Computing courses, and appeared live at a craft exhibition and a Christmas humour night.

The cartooning has got a lot more difficult this year it seems. I can’t think up the ideas well enough and doing so takes forever and causes a lot of anxiety. I am determined to keep doing it because I know I can do it and really do enjoy it when I do it well, and I don’t want to let people down. Also I can’t do anything else. In 2011 I need to find better ways of working if I am to survive with sanity more or less intact.

I must of course thank many people. My wife, who thinks up all of the ideas, and my friends who help in their various ways. My regular clients who pay me to do diagrams, and the commenters on this blog who are creative and invaluable. Also the many people who give me material, intentionally or otherwise, and those who send kind messages. Thanks for putting up with nonsense, of which there is quite a bit, and slackness, which has been occasionally known.

I’ve just noticed that this is more of a newsletter than a Christmas message as it is all about me. Sorry about that.

In summary thanks everyone for your support and have a very happy Christmas.