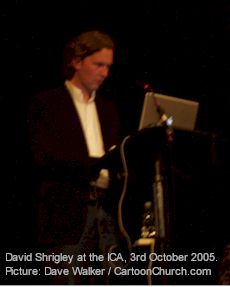 Glasgow-based David Shrigley started out as a cartoonist after going to art college, but friends told him that actually the rough sketches in his notebooks were far more interesting than his cartoons and so he started putting together books of drawings in this less precise almost deliberately badly drawn style. At least I think that’s how the story goes. The talk was more a commentary on a selection of drawings, photographs, sculptures, animations and now even songs. Just the words though fortunately.

Shrigley is very quietly spoken and I think it is quite unusual for him to do talks, so I was very glad we were able to go. I learnt a lot, including that the liquid in Drink Me (a fairly well known photograph of his) is in fact apple juice and that the response he would most like to his work is ‘Ne’er a truer word spoken’. The audience were frequently in roars of laughter, although I do tend to find some of the pictures more amusing than others. Maddie_C pointed out afterwards that she isn’t overkeen on too many severed heads in a cartoon, and I can see her point. A lot of the work is also quite angry – something readers should be aware of if they decide to undertake further exploration of his work – but something I quite like.

As I hinted yesterday David Shrigley has been quite an influence on my own work over the last year or so. It was partly seeing his unrefined style that meant I did my Windsor Report cartoon series the way I did. If I’d have felt that I needed to do it all ‘neatly’ and ‘properly’ then I probably wouldn’t have done it at all and it wouldn’t have led onto the various things it did lead on to.

If there was any disappointment it was only that the talk was rather short (50 minutes) and finished slightly abruptly. I suspect the gallery had set a finishing time or that he had a reception or something to go to, but it would have been nice to have a time for questions. But overall a very worthwhile event. Do have a look at some of these links and there are some books too. Eventually I might get around to sorting out my Amazon affiliation scheme, in which case I will post direct links to the Amazon pages in question.

A recent article, though there are lots more on the website.

The following are taken from the website for readers who don’t have time to do a lot of clicking. Please note that although the specific links here are, in my opinion, fairly universally acceptable some readers may find some of the other content (ie some of that which you will encounter by clicking any arrows) of the website offensive.

Drawings:
Cup of tea for sale
Magnification reveals nature to be boring
Time to choose
At airport
Don’t touch the volcano


David Shrigley’s latest book is the The Book of Shrigley

. His latest project is a dvd entitled ‘Who I am and what I want‘.