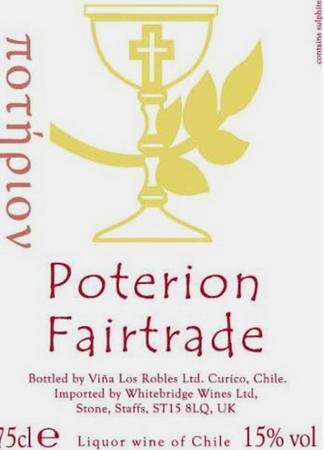 Fairtrade Fortnight is nearly upon us – it is from the 25th of February to the 9th of March 2008.

I heard on the grapevine (I think my wife told me) that Fairtrade communion wine is now available. Jo mentioned it on the Eco Congregation blog, and I found a press release on the Exeter Diocese and Church In Society (pdf) sites which is reproduced below.

The concept of Fairtrade communion wine raises many questions of course. For instance, as someone has asked in the comments – is it better to ship Fairtrade wine half the way around the world rather than buying something produced more locally? And why not just use ordinary Fairtrade wine?

Ehrmanns, the UK importer of Los Robles Fairtrade wines, in partnership with the Fairtrade Foundation and Whitebridge wines is delighted to announce the launch of the first Fairtrade communion wine in the UK. ‘Poterion’, a Communion Wine made from Fairtrade Certified Wine grapes, and produced by Vinos Los Robles from Chile, will be available from Whitebridge Wines from the 4th February in time for Fairtrade Fortnight (25th Feb – 9th March). Through the sale of this wine, grape farmers in the Los Robles Co-operative receive a Fairtrade premium to invest in social projects of their own choice, such as housing and healthcare. For further information and to order these wines, please contact Francis Peel on +44 (0)1785 817229 or email

In 1939 a massive earthquake devastated the Curico Valley in Chile, killing 10,000 people in just two minutes. Following this devastation a group of small and medium sized farmers formed the Los Robles Co-operative to help rebuild the community. In 1990, when Chile became a democracy, two Fairtrade companies, Oxfam (Belgium) and Fairtrade Organisatie (Netherlands), visited Chile looking for trading partners. (Traditionally such organisations set up developmental projects to assist disadvantaged communities to earn a more sustainable livelihood through export trade) This visit marked the beginning of a commercial relationship between Fairtrade organisations, wine importing companies and Vinos Los Robles, and in June 2004 Los Robles was certified by
FLO International (Fairtrade Labelling Organisations International) to use the FAIRTRADE Mark on their wines.

To date 117 Fairtrade farmers and their families have benefited from the many projects that have been set up in the Los Robles community, including:

What the FAIRTRADE Mark means:

Fairtrade in the UK:

The UK is the second largest Fairtrade market in the world, with over 3000 Fairtrade products available and over 57% consumer awareness of the FAIRTRADE Mark. Wholesale wine volumes increased 116.7% in 2006 compared to the 2005 volumes, and a further 113% in 2007*.

The UK is by far the largest consumer of Fairtrade wine, representing a market value of £16.4 million in 2007. (this figure has more than doubled from the £7million market value quoted by Nielsen in 2006).

The FAIRTRADE Mark is an independent consumer label for products that have been certified to internationally agreed Fairtrade standards, set by the Fairtrade Labelling Organisations International. The Fairtrade system enables disadvantaged
producers in developing countries get a better deal from International Trade.

Is the leading importer of Fairtrade Wines to the UK, including Los Robles, Stellar and Thandi and as such has a particular commitment to Fairtrade. Its overriding principal in this area is to offer a fairer deal to producers in developing countries. For further information about these Fairtrade wines or images please contact Karis Hunt, PR Manager, Ehrmanns Ltd. 0207 418 1804, M: 07971 161167 karis.hunt at ehrmanns.co.uk or Fairtrade Brand Manager, Ehrmanns Harriett Gething DL: 0207 418 1847 harriett.gething at ehrmanns.co.uk

Los Robles and Ehrmanns are both mentioned in the press release, but I couldn’t find anything about the communion wine on their sites, or indeed on the Fairtrade Foundation site. It would appear that the Poterion wine has been available for quite a few years, but perhaps it hasn’t been Fair Trade certified up to now.