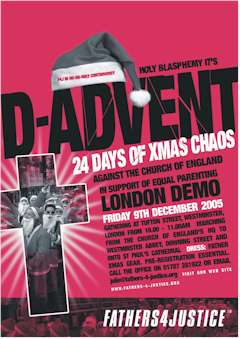 This from the Church of England communications office, via Ian:

“Campaign Group Fathers 4 Justice (F4J) said today that all 12,000 of its members will engage in a national campaign of civil disobedience designed to disrupt Church of England services across the country in December, including a march on St Paul’s Cathedral on Friday 9th December with thousands of Father Christmases.

The group says that it’s ‘D-ADVENT’ campaign of 24 days of Christmas chaos will see protestors scale Church roofs, stage sit in’s and deliver alternative services from the pulpit. Other groups are said to be preparing to blockade churches. A controversial religious Calendar and Xmas card are also planned by the organisation.

“The group stormed a General Synod Service in York Minster in July 2004 and latterly climbed St Paul’s in May this year. Representatives from F4J met the then Archbishop of York David Hope but no further progress was made.

Said campaign co-ordinator Ray Barry, ‘Christmas is a time for families but many kids will be asking ‘where is my father this Christmas?’ We are commanded to honour our father and our mother by the church yet fathers are being sidelined from christenings and confirmations and the church plays little or no role in trying to prevent relationship breakdown within families.’

F4J Founder Matt O’Connor said ‘We are going to rattle more than their collection plates this Christmas. The Church of England should be practising what it preaches rather than turning a blind eye to this problem. Where it should be setting an example of morality, equality and compassion in regard to family breakdown, it agonises over global warming and gay and lesbian priests. We will open their eyes and ears to the problems of fatherlessness and take the issue into the churches of Britain addressing directly as many congregations as we can.’

This makes me sad. Don’t they know the huge amount that clergy, youthworkers and ordinary members of churches the length and breadth of the country do in terms of “trying to prevent relationship breakdown within families”. Obviously not. Probably because it happens behind closed doors without a song and a dance (or climbing on roofs).

Unfortunately this sort of action is just lashing out for the sake of lashing out, and makes me at least less likely to listen to what is probably a very good cause. But then there are lots of very good causes. The ones who seek to make their point in this kind of aggressive manner do nothing to help themselves.