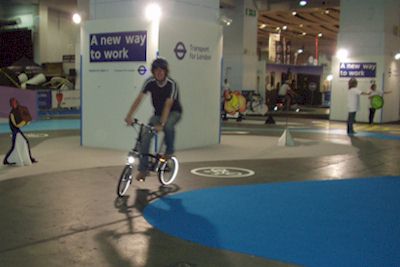 As I have said before (hence the continued’) I love the idea of getting a folding bike. The picture above is me test riding a ‘Brompton’, the ultimate in folding bikes, at the Cycle Show. Bromptons cost about £600 once you have bought all the trimmings. As you can see I am blurred owing to my great velocity. The lady on the right is guiding the traffic as the test track is a figure of 8 – in other words it crosses over itself on a diagonal basis. This is to give an element of danger which adds realism to the test ride. The other lady on the right is the assistant to the lady guiding the traffic. I’m not sure what her job is, but it involves standing there. The figure on the left is a cardboard cutout for safety reasons as it would be too dangerous to have a real person there with all these test-cyclists whizzing around. This also adds a sense of realism for those who will find themselves regularly riding in areas populated largely by cardboard cutouts.

When I was in the supermarket yesterday I noticed that someone was advertising a folding bicycle for only £25 in the postcards. £25! Buoyed with enthusiasm I called up and made my enquiries. Unfortunately the man did not have the answers to my in-depth questions, like ‘What make is it?’, so I decided I had better go and see it.

I went on my folding bicycle inspection excursion this morning. Upon seeing the bicycle I instantly knew that it was not what I was looking for as it was a bit rubbish, so told him that I would not be buying it. I came up with a convincing reason involving the handlebars. He said that that was fine, not a problem at all. At which point in a moment of madness I said: ‘Oh, alright then, I’ll buy it.’

I am an idiot sometimes.

Unfortunately the bicycle really is rubbish. It is unique amongst folding bicycles in that it folds into a shape bigger and less convenient than the shape it started from. One popular folding bicycle website says this about it:

The Skoda of folding bikes – the Universal is still the cheapest folder available, but the Chinese are challenging. Made in Poland, the bike looks like a 1960s-vintage ‘shopper’, which is exactly what it is. It’s heavy, it doesn’t fold very well or clip together, and the ride and handling are poor. Yawn, yawn. Long, long overdue for a replacement

Does anyone want to buy a folding bicycle?