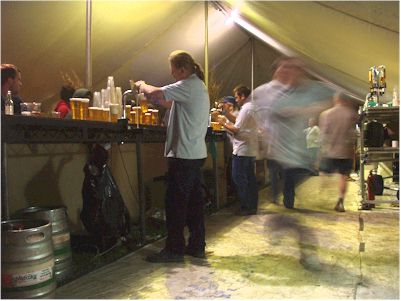 Surefish are organising a ‘Great Big Hymn Sing‘ at the Greenbelt Festival and are trying to find which are the 10 most popular hymns using a public vote. You can listen to music files of the music to help you decide. It sounds like a complex process with the hymns being whittled down to 50, then 25, then 10, a bit like we don’t do in church, though it’s an idea.

At last year’s festival there was a very successful ‘beer and hymns’ evening in the beer tent. Unfortunately the concept became a bit hijacked by charismatic types who started to sing dubious praise choruses in the beer tent the following night, putting everyone off their organic real lager. The beer tent staff had to extinguish their over enthusiasm by turning up some 80s music on the PA system.

I know this makes it sound like I spend my Greenbelt Festival evenings in the beer tent – I was probably just happening to be passing by on both occasions.

Above: Beer tent at Greenbelt – view from behind the bar as seen by someone who was probably just happening to be passing by.

Update: St Clement Chorlton are holding a beer festival this weekend, via Rob on the Sanctus1 blog.