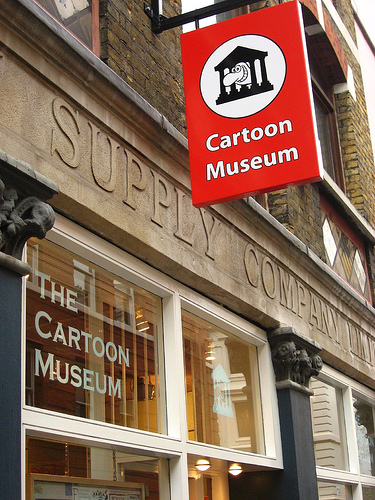 Yesterday we trudged through the rain to the Cartoon Museum in London to see the current exhibition, H M Bateman: The man who went mad on paper (pdf link).

Bateman (1887 – 1970) was one of the first to draw cartoons as we know them today, ie an humorous drawing with a funny caption. Until then the drawings had tended to be largely straight, with all of the humour being in a (often lengthy) text underneath. I like the style of much of Bateman’s work – often an entire scene with plenty to see, or a sequence where a comic situation unfolds. He is best known for his ‘The man who…’ pictures, which depicted various social faux pas, usually hapless individual doing the wrong thing whilst onlookers react with horror.

You can see more of his work via the H M Bateman website (click ‘print gallery’). The exhibition is on until 22 July and costs £5.50. Well worth seeing even if (like me) you have books of his work – I hadn’t seen most of them before.

Above: Cartoonist and caricaturist Henry Mayo Bateman (1887 – 1970) works on one of his sketches at his home in Reigate, Surrey. (Public domain)