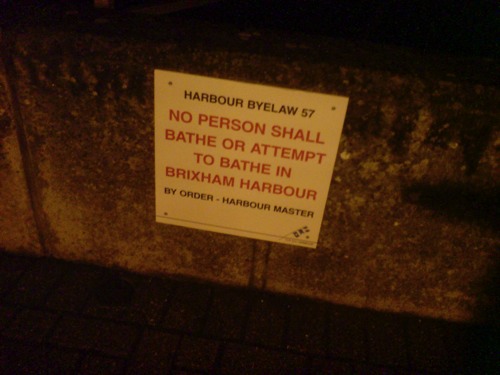 Readers tuning in hoping for a picture of me bathing in Brixham Harbour will, I’m afraid, be sadly disappointed.

I think all right minded people would agree that bathing in Brixham Harbour should be severely frowned upon. But it is the illegality of the ‘attempted bathing’ that presents one of the great moral issues of our time. One imagines that such bathing attempts might fail for various reasons – ill fitting bathing costume, inability to find a suitable locker for valuables, the presence of green slime that only became apparent upon scaling the harbour wall, etc.

My travelling companion was vehement that such attempts should be outlawed in the same way that waving a gun around in a bank is not really the done thing. But I am of the school of thought that says that failed bathing attempts should be allowed for the amusement of the general public, as long as they do not pass that thin line between ‘attempted bathing’ and ‘bathing’.

What do you think? I have added a poll (left) in order to test the mind of the international community on this matter.