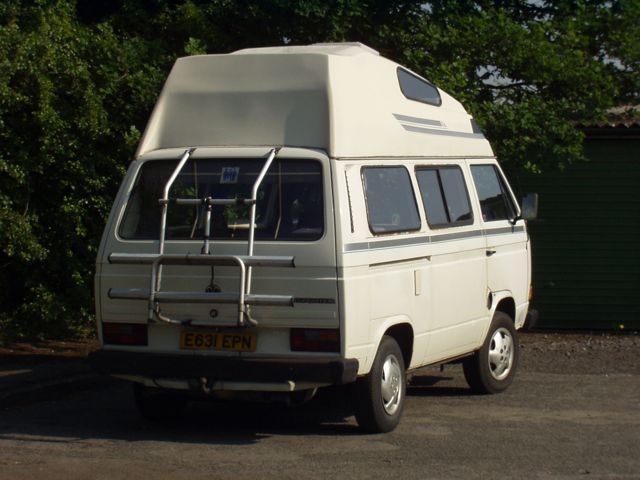 According to the registration document I bought this campervan on 30 June 1999. It has accompanied me on holidays, house moves, festivals, travels and excursions. It has been used for many significant events, such as the departure vehicle on our wedding day and it even carried my canvasses to the Lambeth Conference.

Unfortunately for various reasons I need to sell it. I know I’ve said that before, but this time I mean it. It is likely I will be posting it on Ebay this weekend. I expect it to make in the region of 1000 to 2000 pounds, but it is very difficult to tell with these things. It will need to go for an MOT in the next few days, which of course it might fail. In summary: it is a VW Type 25 1988 1.6 turbo diesel (‘turbo diesel’ is industry jargon for ‘a bit slow’, but it isn’t too bad). It goes and somebody could enjoy using it over the summer. Structurally it is sound, but cosmetically the bodywork is poor (worse than in this picture) owing to my incompetence. There are some other (hopefully) minor faults which I will explain when I do the advert. The interior is superb – better than most similarly aged vans on Ebay at the moment.

My other posts about this and other campervans are here.