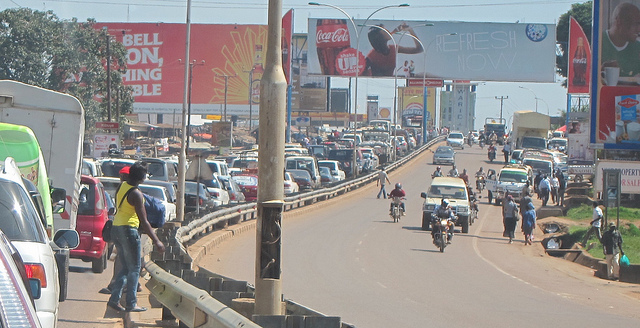 Time to put my degree in transport (you can see the certificate if you don’t believe me) to good use, and write about how people get around in Uganda. We experienced Kampala traffic on the first morning (pictured above) but most of the places we have been to have been rather more rural. The heirarchy of transport appears to be: foot / bicycle / motorbike / transport shared with lots of other people. An example of the latter is shown above, though there are minibus taxis too (less photogenic). I quite liked the example below – one of many vehicles with Bible verses and the like on them. Exodus 3:7 is about freedom from oppression: “The Lord said, “I have indeed seen the misery of my people in Egypt. I have heard them crying out because of their slave drivers, and I am concerned about their suffering.” Many people ride bicycles, and use them to carry all manner of things. The picture below shows goats being carried – and yes, they are alive. Our driver, Joseph, asked the lady before I took this shot. Joseph thought it surprising that we find carrying live goats on the back of a bicycle unusual. These children are using a bike to carry water in the yellow plastic cans that seem to be commonly used. I wonder how far they had to go. This afternoon I had the opportunity to try riding a Ugandan bicycle. The picture (thanks to Bex) shows me giving Joseph a lift – ‘roles reversed‘, as Liz put it. The bikes are mostly very large and heavy with rod brakes and sprung saddles. They are the kind of bikes one might have had in the UK in the early 20th century. I imagine, though I couldn’t find any information online, that the design is from colonial days. But on these roads durable is more important than light.

For many of the people we have been meeting even owning a bicycle is something they can only hope to be able to do one day. This is where PEP, the process supported by Tearfund, comes in. Liz has explained what PEP is here, but in summary it is a programme helping people to see that change is possible if they make the most of what they have and work together with others in their communities.

Finally, and not especially related to transport at all, except that it is taken from one of our vans, an 11 second video I took this afternoon of children waving and running alongside us. They love to see vans and white people, both being somewhat of a rarity. (Click link to see video – trying to keep loading times down on the blog.)

Tomorrow we are visiting a different community, so I have no idea what to expect. As usual you can follow our progress on #tfbloggers on Twitter or tearfund.org/dave.