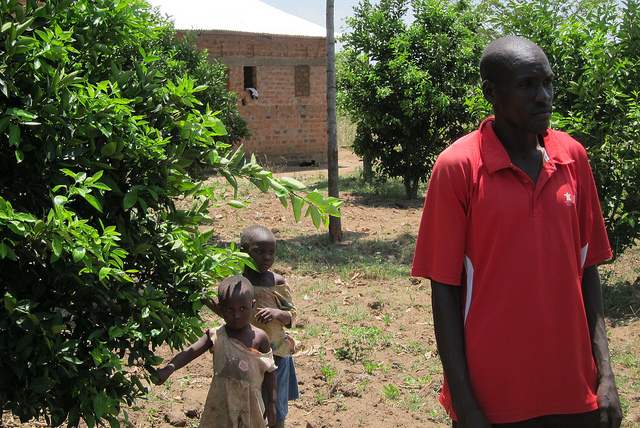 We’re travelling back today, and probably won’t have a lot of internet access, so here’s one I prepared earlier…

At times on this trip I have asked myself whether we have only been shown a sanitised version of reality. In other words, have we just seen carefully pre-planned set pieces from people who are particularly enthusiastic about the work that is being done?

I think that yesterday’s final visit has demonstrated that this isn’t the case.

The plan for the day was to visit a different village and hear more stories about the PEP process (explanation in footnote at end of post). We arrived a bit earlier than expected, and there was then quite a lot of waiting around while a misunderstanding was cleared up. At some point a group had visited this church and had made some promises that hadn’t been met, and so there was some debate as to whether the people would be willing to talk to us about the PEP process, and we thought we might just be leaving again.

Eventually things seemed to be resolved, and so we heard some stories, and then went to three homes to see what had been described. I’ve posted pictures below, with descriptions underneath each picture. Isaac took us to his brick-built house with a metal roof. This is the first such building we have been in in any of the villages. By growing crops and buying and selling cassava he has been able to get the house to a point where it is nearly finished. Grace told us how she started her business with 800 shillings (about 20p). By making bread, then buying and selling fish she has got to the point where she is able to buy a cow (390000 shillings), which has given birth to two calves. Her quality of life is much improved – she joked with us about the choice of clothes that she is now able to wear. John Julias is aiming to pay for university fees for his son by buying and selling groundnuts. He told us how hard it is for people in rural communities to send children to university. This shows his storeroom. The PEP process encourages people to be wise – building storage and waiting to sell produce until prices are high.

This was our final day visiting people. Today we head back to Kampala to catch the plane, and this post will hopefully post using advanced mechanisms.

Footnote/reminder about the PEP process as I keep using the phrase. It is a programme, coordinated by AOG and supported by Tearfund, that helps people improve their lives by using whatever very small resources they have, working with others and making good use of time. It is taught largely through role play – no handouts. This is my understanding anyway.