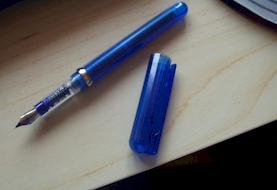 I asked art blogger and and blog artist Rob Pepper about the pens he uses and he very kindly sent me one. It’s a blue ink pen from a large chain of uk supermarkets (Name similar to ‘DISCO’ but with some different letters).

I’ve included a photograph of the pen (left), but not with me holding it as a recent commenter has told me that I have ‘feminine looking’ hands which need ‘butching up’. I will no longer be posting photographs of my hands on the blog.

Anyway, about the pen:

Plus points:
– It writes / draws very well.
– It is superb value (under a pound).
– It’s a cartridge pen so you could change the ink. I do everything in black so I’d need to get a black cartridge if I was using it for my artwork.
– I suspect it would last longer than the fibre tip and fineliner pens I use.

Minus points:
– I find that occasionally I don’t get a line even when the pen is on the paper. I suspect this is because I sometimes press too lightly being used to a fibre tip pen where a slightly lighter touch produces a slightly thinner line. Or it might be that I hold the pen at a funny angle or something like that.
– I’m not used to using an ink pen for drawing, and so at the moment I still prefer the results when I use a fibre tip. I suspect this would change if I used an ink pen a lot.

Many thanks to Rob for sending me the pen. Do take a look at some of Rob’s work. His blog drawing are done using the “Conscious Reflex Drawing” method, technical name for not looking at the paper whilst drawing. You can order prints of the pictures on the blog by clicking on the image you’re interested in. Rob’s Doxology pictures, drawn during services at central London churches might be of particular interest.