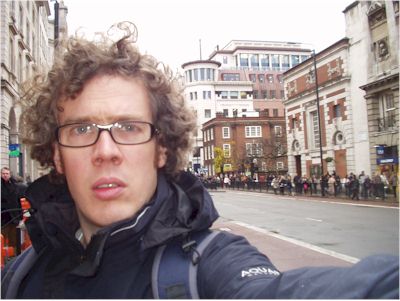 Thousands of people have taken part in marches around the world to highlight the issue of climate change. This is my report, though iit must be emphasised that I am really a very poor example of a climate change marcher for reasons that will become apparent.

Above: Me on the climate change march. I look very serious in the photograph as one looks stupid enough taking a photograph of oneself standing in the street as it is without grinning inanely.

Mine was not a particularly effective contribution, seeing as I:

I did eventually catch up with the marchers in Grosvenor Square. It didn’t seem as big as some of the Make Poverty History marches, but it is difficult to judge figures. The news reports are saying 10000. It must be borne in mind that it rained very heavily for much of the day which must have affected attendance.

Above: There were all sorts of weird and wonderful protesters. There were lots of ordinary people there too, but they don’t make such interesting photographs.

Above:It was good to see some Christians there – I would of course have seen many more if I’d attended the service held beforehand (or indeed the march itself). This is the banner from the Christian Group ‘Operation Noah’. That actually is Noah in the foreground.

Above: Whilst various speeches happened at one end of Grosvenor Square a group of protesters did some drumming at the US embassy end whilst the police watched from the other side of a barrier. As the message was delivered through the medium of drumming I can’t tell you exactly what it said, but it was along the lines of ‘Something must be done about climate change’.

Above: Photograph of the speaker George Monbiot taken with a camera that was plainly not up to the task with the low light levels. His was the one speech I listened to from a reasonably close vantage point, having meandered through the crowd to take the above photo. I found what he said thought provoking, though I’m not sure to what extent I agreed with all his conclusions about, for instance, the taking of ‘direct action’. I need to do some more reading. I don’t know whether there is a transcript of the speech online, but this recent blog post contains some of the same themes. This blog has some quotes from yesterday’s speech.

Important reminder: UK residents have until 12 noon on Monday to vote for Sustrans Connect 2 (more cycle and walking paths where they will make a real difference) on the £50million Lottery Whathaveyou. You can vote once by internet, once by phone and once from your mobile. The landline phone voting only costs 10p.