Taken from my book ‘From A to B‘, published by Bloomsbury.

Various things to say about cycle helmets, if anyone wants to know the thinking behind this diagram.

First of all. Do I wear a cycle helmet? Sometimes yes, and sometimes no.

If I’m riding slowly, somewhere that’s away from traffic, I tend not to, as I’m fairly confident it is as safe an activity as many others that I do. To give examples: if I go for a walk on an icy pavement after it has snowed I don’t wear a helmet, even though the chance of my falling over is far higher than when I’m riding a bike. If I’m going up a ladder to put the Christmas decorations into the roof, I don’t wear a helmet, even though I’m clumsy and incompetent.

But if I’m riding where there’s traffic I do wear a helmet, as my confidence in drivers to keep me safe is extremely low. And I’ll wear a helmet if I’m riding my road bike at speed (highly unlikely these days), or riding off road. It seems, to me, like the right thing to do.

The fact is that the safest places in the world to ride a bike, ie the places you are least likely per have a serious injury per mile cycled, are places where almost no one wears a helmet. Look up the statistics if you don’t believe me. So, for instance, places such as the Netherlands. Why is this the case? Well, it would be hard not to conclude that the fact that people on bikes are kept largely separate from people driving cars has a lot to do with it. Or you could argue that there is more of a cycling culture, so drivers know how to deal with people on bikes safely. Which ever of these it is, the point stands – it’s not the act of cycling in itself which is dangerous.

This cartoon, as with others I’ve done on the topic, isn’t telling you whether to wear a helmet. It’s a comment about people who (for instance) see a picture of someone riding a bike online, and immediately say ‘why aren’t they wearing a helmet?’ If you’re going to object to people riding without a helmet, then logically you should also object to other more risky behaviours. I’ve forgotten everything I learned on the last first aid course I did, and I’m not medically trained in any way, but I think a doctor would tell you that inactivity is the most risky thing of all.

Wear a helmet. Don’t wear a helmet, but don’t tell other people what to do unless it’s also your habit to tell people not to drink, smoke, use ladders, or sit on the sofa and watch box sets. And, to be honest, I’d say don’t do that either. 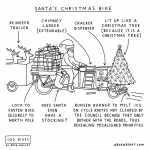