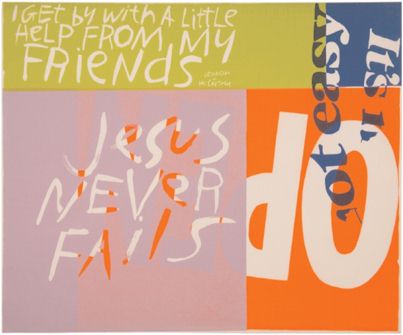 Admired by Charles and Ray Eames, Buckminster Fuller and Saul Bass, Sister Corita Kent (1918-1986) was one of the most innovative and unusual pop artists of the 1960s, battling the political and religious establishments, revolutionising graphic design and encouraging the creativity of thousands of people – all while living and practicing as a Catholic nun in California.

So says the Guardian on a slide show page about an Exhibition of Sister Corina’s work currently showing in London. The official site has more examples of her work, and there is a new book of her work published by Four Corners Books – more about the book, ‘Come Alive! The Spirited Art Of Sister
Corita’ can be found on their site. Thanks to Richard Embray of Four Corners Books for the image used in this post.