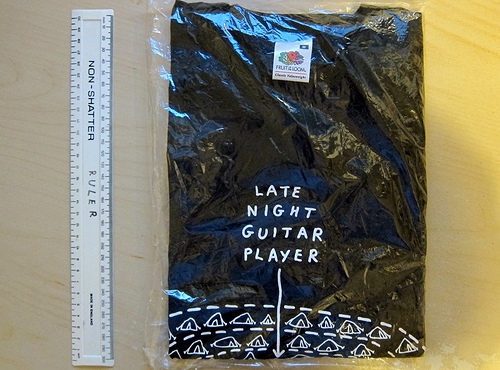 I have one cartoon t-shirt to give away. It is a standard issue black Hymns Ancient and Modern Greenbelt Bookshop 2011 staff t-shirt, size medium. It has this cartoon (but white on black background) on the front and the word ‘STAFF’ on the back. When worn by a someone like me it looks something like this. It is unworn and in original wrapping. I’ll throw in a few small cartoon bits and bobs too.

All you have to do is post in the comments below by 9am on Friday 16 September (36 hours time) and I’ll choose one person at random using some kind of method involving cutting up tiny pieces of paper and throwing a hat at them (or similar – method to be decided). If you wanted to post a cartoon idea as your comment then that would be lovely, but anything will do.

The ruler in the picture is to show what a wrapped t-shirt looks like when placed next to a NON-SHATTER ruler. Yes, I do have the word ‘RULER’ written on my ruler.

One entry per person. Judges decision final. No cash alternative. Sorry there is only a medium, but that’s all I have – you could give it away to a medium sized person. I reserve the right to think up other rules as I go along.