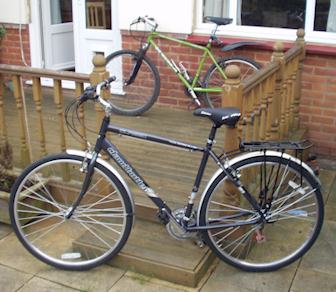 Above: The bicycle, with my old bike, a 1991 Kona mountain bike, behind.

You may remember that a month or so ago I talked about Buying a bicycle, and then a week or two ago said that I had ordered it. Well, it has now arrived. The bike I went for was the Claud Butler Classic, which cost me £190 and is widely available in the UK for £200 or less. I did take into account the excellent advice given to me, but decided to go for this bike rather than a more expensive one for the following reasons:

Anyway, must dash. Another trip to the dentist coming up…