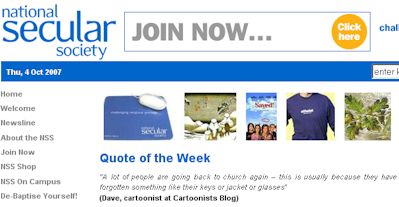 I was surprised to discover that I have made the quote of the week on the National Secular Society website (Thanks to Arun for the tip):

“A lot of people are going back to church again – this is usually because they have forgotten something like their keys or jacket or glasses”
(Dave, cartoonist at Cartoonists Blog)

Of course, as we (and they) know full well this is not a ‘quote’, but a caption from one of my cartoons:

[Large version of ‘Back to Church’ cartoon]

A caption is designed to be read with the cartoon it accompanies and is not the same as a quote. Out of context a cartoon caption may appear to be saying something which it is not. Thus the Secularists mislead their audience, which is a little bit naughty of them.

I had a quick look around the National Secular Society website whilst I was there. They come across as ‘oh so balanced’ upon first reading:

We want a society in which all are free to practise their faith, change it or not have one, according to their conscience.

But when I clicked another link at random things were not looking quite so reasonable. This page contains a letter from a reader describing a vicar as “a probable child abuser in a dress”, something that I found really quite offensive. There is no disclaimer that I could find saying ‘these letters do not necessarily represent the views of the National Secular Society’ so one assumes that they do.

If that is secularism then I think perhaps that you can probably keep it.

Update: At the time of writing the Secularist website is down if you use the normal address – but I found a version that works here.