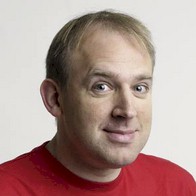 In the old days when I used to go to Spring Harvest I went to see Tim Vine either doing a one man show or doing one of his double acts with John Archer. Tim’s style is to do lots of jokes one after the other and I remember laughing considerably. His Wikipedia page gives some samples.

Tim has gradually worked his way up the comedy / celebrity ladder via such things as ‘the Sketch Show’ and ‘Not Going Out’ and is now part of the ‘Comic Relief does Fame Academy’ which is on the BBC TV over the next week or so. Tim’s page on that show is here.

Tim is a churchgoer and goes to a largish Church of England church in Surrey. I won’t say which one in case hordes of Cartoon Blog readers hound him for autographs after the 10am.

Anyway, best of luck to him. He is a nice fellow and deserves his success.