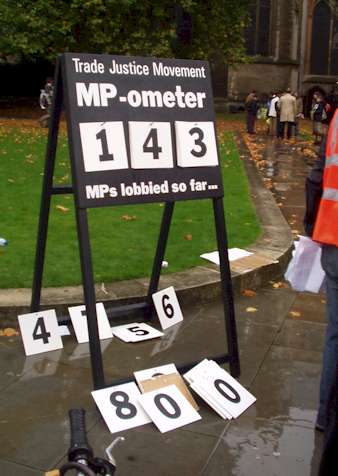 Today I went to London to join in with the Trade Justice lobby of Parliament, the main event of the campaign since the G8 demonstrations in the summer. They are saying 8000 people were there and I can well believe it, although the news has been rather overshadowed by other political events today. The BBC has Anti-poverty protesters lobby MPs, but also What happened to the Make Poverty History campaign?.

It did start to rain quite considerably half way through so all credit to those who made a day of it. I wandered around a bit and took some photos but eventually the weather got the better of me. It was quite impressive though, lots of little groups here and there talking to their MPs and a queue that went all the way through the park alongside the Houses of Parliament and then across the bridge and along the bank on the other side.

Click here to see a few more of my photos with ‘witty’ captions.

Picture of queue of lobbyists outside Parliament. My word, that is a big doorway.

The people of the West Midlands amass on the bridge. Insert shows just how many of them there were. You can see it is getting very dark and forboding. It went on to rain a lot.

Some nuns have lunch.

There’s only so many pictures you can take of a queue of people. This one is of a rickshaw with ‘trade justice’ umbrella.