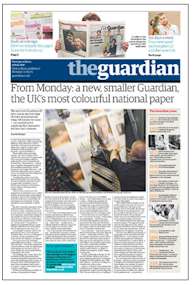 Yes, it is becoming triangular.

Ahem. I have to start the blog with some absurd statement or other as the Cartoon Blog headlines and first sentence now appear on the Wibsite front page and I have to persuade the readers to click by offering them ever new levels of extreme interest and intrigue.

The Guardian newspaper is actually changing from it’s regular broadsheet format to something known as a ‘berliner’. There are details on the Guardian website and I imagine that over the next few days they will have an extensive television advertising campaign. I suppose they weren’t to know that I was going to post about it. The advantage of a berliner over a tabloid is that (1) everyone knows that things written in the tabloids are made up, (2) there’s more room in it, for… very long pictures and things.

It should be better than a broadsheet too for those wanting to read the paper on the Eurostar or in small cubicles and sheds. Maddie_C is very pleased about the fact it won’t be a broadsheet any more, as her arms when fully outstretched don’t reach from one end of the broadsheet Guardian to the other.

Well, we’ll have to see how it actually works in practice. I’d be very pleased to hear from readers who have road-tested the new Guardian on the ground, as it were.